Hurricane Irene wound up by most estimates as one of the top ten most destructive and deadly hurricanes to hit the United States since 1980. While ultimately not as powerful as many had predicted, the storm still killed at least 27 people along its path from the Caribbean to the eastern seaboard. Transportation was shut down all along the east coast, stranding residents and tourists in shelters, airports, and train stations. More than 5.8 million customers lost electricity, thousands of flights were cancelled, flooding washed out roads and destroyed homes, and evacuation orders were issued for hundreds of thousands. Gathered here are pictures from the Hurricane’s path. — Lane Turner (44 photos total)

1. Billy Stinson comforts his daughter Erin Stinson as they sit on the steps where their cottage once stood on August 28, 2011 in Nags Head, N.C. The cottage, built in 1903 and destroyed by Hurricane Irene, was one of the first vacation cottages built on Albemarle Sound in Nags Head. Stinson has owned the home, which is listed in the National Register of Historic Places, since 1963. “We were pretending, just for a moment, that the cottage was still behind us and we were just sitting there watching the sunset,” said Erin afterward. (Scott Olson/Getty Images)

2. In this handout image provided by NOAA, Hurricane Irene churns of the coast of the Carolinas on August 26, 2011. (NOAA via Getty Images)

4. A resident rides a horse through a flooded neighborhood after the passing of Hurricane Irene in Nagua, Dominican Republic on August 23, 2011. Hundreds were displaced by flooding in the Dominican Republic, forced to take refuge in churches, schools or relatives’ homes. Electricity also was cut in some areas. (Roberto Guzman/AP) 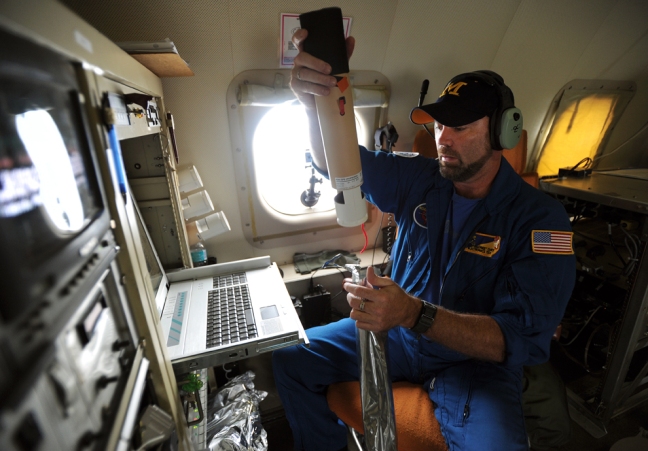 5. Bill Olney, an electronics technician aboard a P-3 Orion turboprop named “Kermit”, prepares a dropsonde to be sent into Hurricane Irene as the crew observes the storm. (Chris Urso/Tampa Tribune/AP) 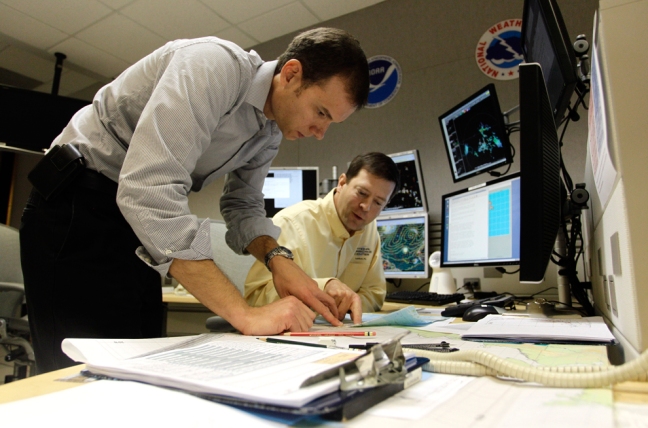 6. Jamie Rhome, storm surge specialist (left) and Don Brown, senior hurricane specialist, study a map at the National Hurricane Center in Miami on August 24, 2011 as Hurricane Irene passes near the Acklins and Crooked Islands in the Bahamas. (J Pat Carter/AP)

7. Cory Ritz braces himself as a wave bursts onto a pier at the Boynton Beach inlet on August 25, 2011 in Boynton Beach, Fla. (Joe Raedle/Getty Images) 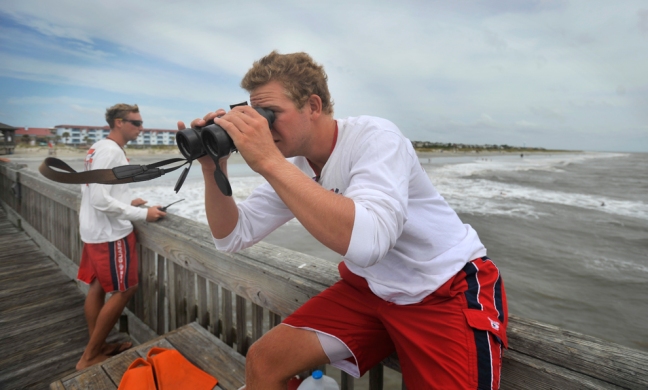 11. Tybee Island Ocean Rescue lifeguard Andrew Robinson watches surfers with a pair of binoculars after closing the water to swimmers from the pier in Tybee Island, Ga. on August 26, 2011. (Stephen Morton/AP)

12. Hotel workers put outdoor furniture in a pool to keep it from blowing away in preparation for Hurricane Irene on August 26, 2011 in Ocean City, Md. Ocean City Mayor Rick Meehan has ordered a mandatory evacuation for thousands of residents and visitors. (Mark Wilson/Getty Images) 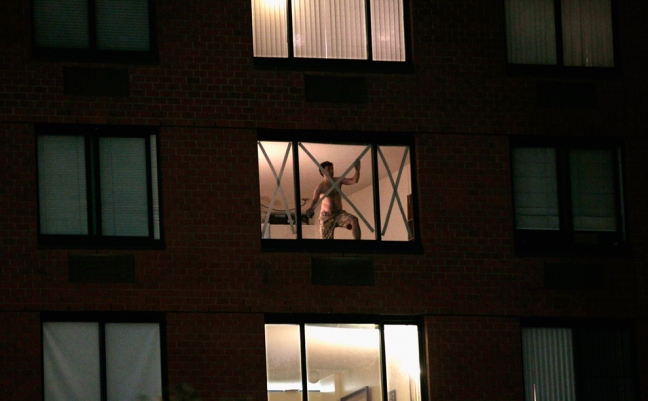 13. A resident in a Battery Park City high rise apartment building tapes his windows ahead of the arrival of Hurricane Irene on August 26, 2011 in New York City. (Chip Somodevilla/Getty Images) 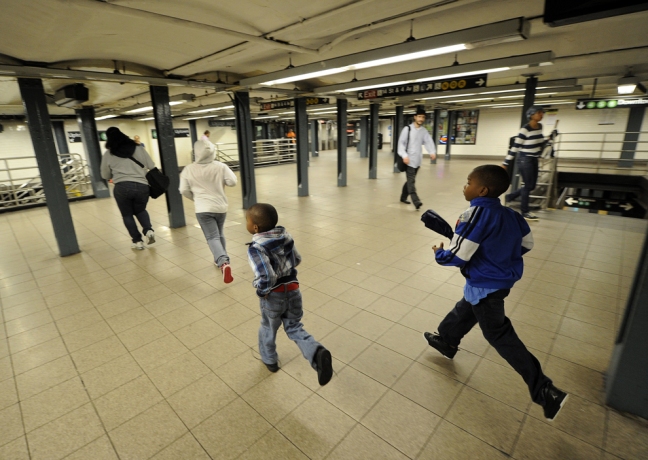 14. A family runs to make a connection at Union Square station as New York City’s entire mass transit system shuts down at noon on August 27, 2011 to prepare for Hurricane Irene. (Timothy A. Clary/AFP/Getty Images) 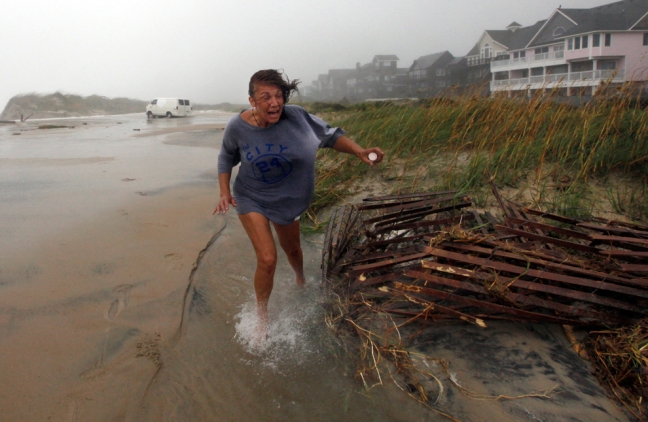 15. Jackie Sparnackel has to abandon her van and her belongings near the Frisco Pier after she drove up to see how the storm-battered structure was doing on August 27, 2011 in Frisco, N.C. (Chuck Liddy/The News & Observer/AP)

16. A group of sailors run through the streets of the nation’s capital during pouring rain in advance of the arrival of Hurricane Irene on August 27, 2011 in Washington, DC. (Win McNamee/Getty Images)

17. People shield themselves from blowing sand and rain as they look over the beach during Hurricane Irene on August 27, 2011 in Kill Devil Hills, N.C. (Scott Olson/Getty Images) 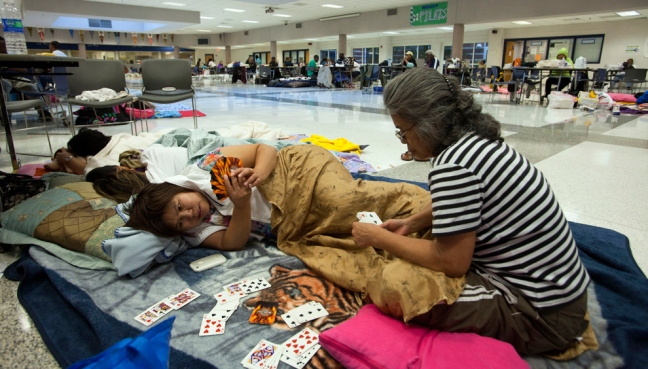 18. Noy Chanthasri and her mother Suksan Chanthasri, who is visiting from Thailand, play “rummy” in the Norview High School shelter on August 27, 2011, in Norfolk, Va. (Bill Tiernan/The Virginian-Pilot/AP)

20. Pedestrians struggle against a blast of wind and rain from Hurricane Irene in downtown Washington, D.C. on August 27, 2011. (J. Scott Applewhite/AP) 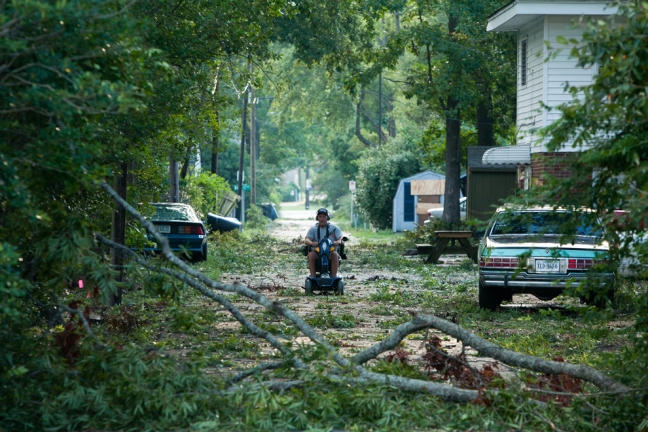 25. A deer wades through floodwaters in the aftermath of Hurricane Irene on August 28, 2011, in Lincoln Park, N.J. Irene was just the third hurricane to come ashore in New Jersey in the past 200 years. (Julio Cortez/AP)

28. Steve Egbert of Des Moines, Iowa reads from his journal at a shelter set up in Portland, Maine as Hurricane Irene made its way into the state on August 28, 2011. Egbert had been camping in western Maine for a week and was trying to get home, when both his bus and plane reservations were cancelled. (Pat Wellenbach/AP) 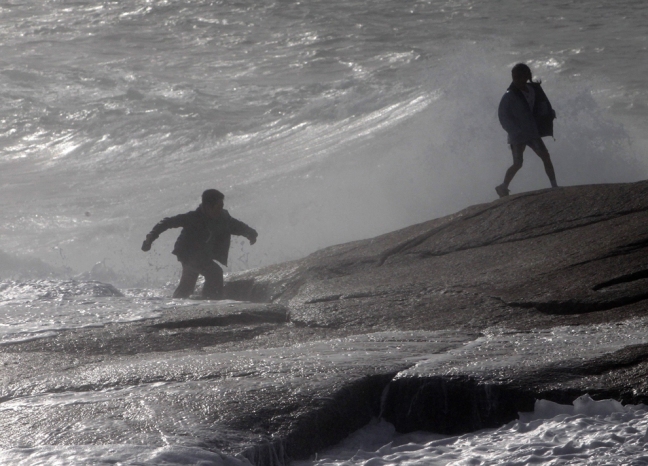 31. A man and his daughter scramble across the shoreline after being hit by a wave on August 28, 2011 in Peggy’s Cove, Nova Scotia. (Mike Dembeck/The Canadian Press/AP) 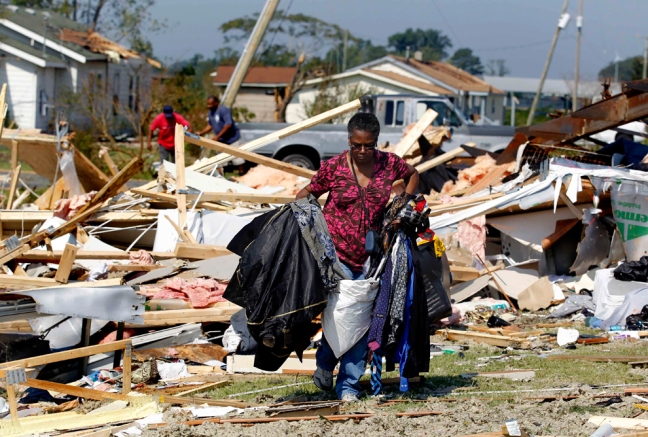 33. Janie Gibbs helps clean up a friend’s destroyed home on August 28, 2011 after it was hit by Hurricane Irene in Columbia, N.C. (John Bazemore/AP)

34. Nick Siragusa works on keeping the sump pump unplugged as he helps remove the water from the flooded lobby of the Allegria hotel as Hurricane Irene swept through on August 28, 2011 in Long Beach, N.Y. (Joe Raedle/Getty Images)

35. McKenzie Joyce (left) and Teresa Desmond play in the wind on the Scituate, Ma. shoreline south of Boston as Hurricane Irene moves through the area on August 28, 2011. (Michael Dwyer/AP) 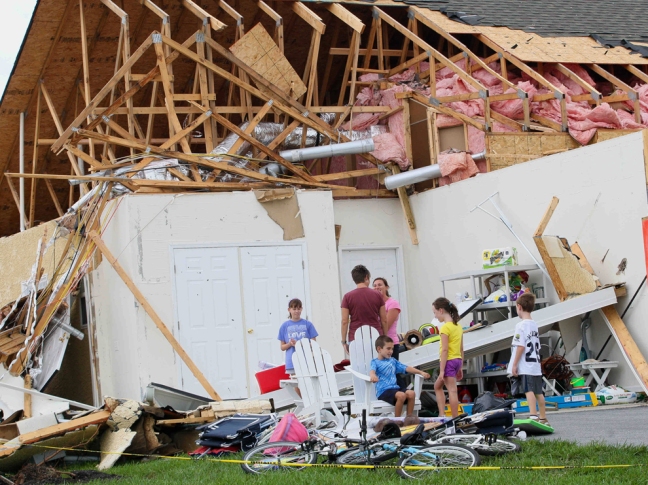 36. People look over the damage to Sue and Jack Holloway’s home in the Nassau Station development in Lewis, Del. on August 28, 2011. (Suchat Pederson/The News Journal/AP) 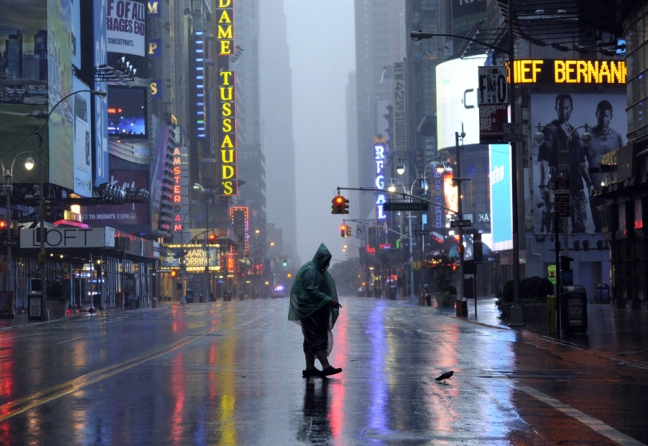 37. A man walks across a nearly-deserted 42nd Street in Times Square in New York on August 28, 2011 as Hurricane Irene hits the city. (Timothy A. Clary/AFP/Getty Images) 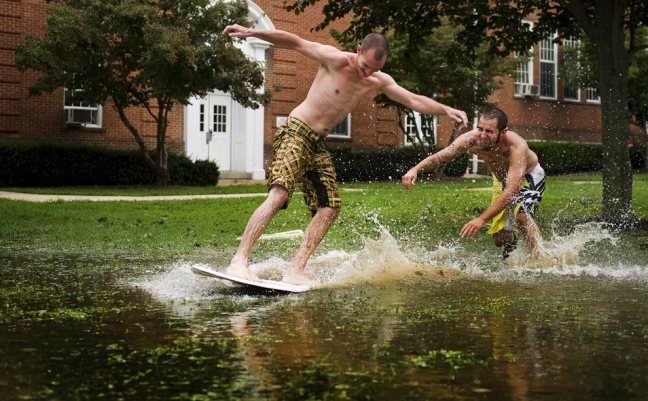 38. Mark Wade chases his friend Craig Busick as he surfs a large puddle in front of the Board of Education in Centreville, Md. on August 28, 2011. (Jim Watson/AFP/Getty Images)

39. Rescue workers help a woman off a floating dock they feared was going to break loose during Hurricane Irene in New Bedford, Ma. on August 28, 2011. (Winslow Townson/AP)

41. A man surveys the damage around a friend’s home as a sailboat is washed ashore as Hurricane Irene arrives on August 28, 2011 in Southampton, N.Y. (Joe Raedle/Getty Images)

42. Casey and Denise Robinson clear out their destroyed beach home in the Sandbridge area of Virginia Beach, Va. on August 28, 2011, the day after Hurricane Irene moved through. Officials speculate that a tornado swept through the area. (Steve Helber/AP) 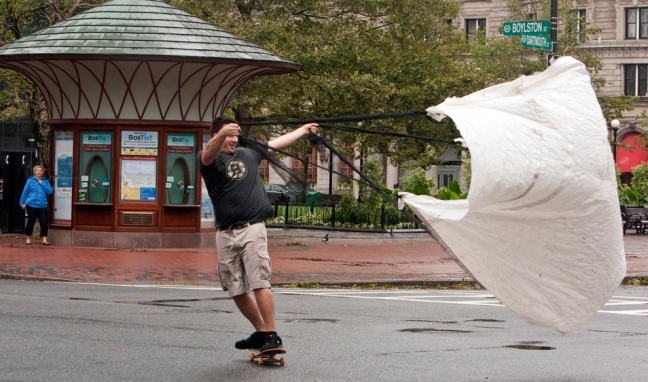 43. Melvis LaBrecque of Boston takes advantage of Irene’s winds to ride his skateboard with a homemade parasail on August 28, 2011. (Matthew J. Lee/Globe staff) 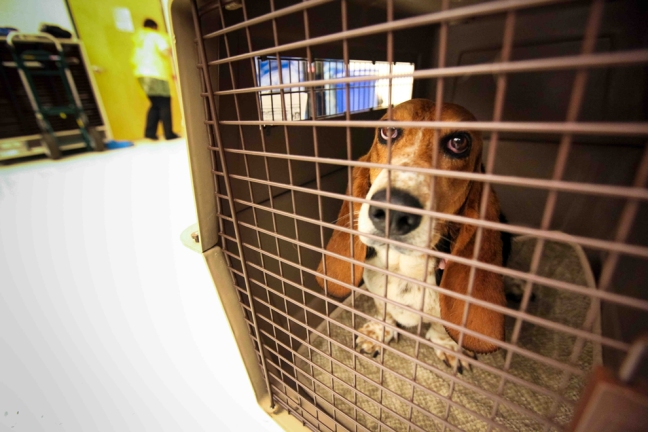 44. Susie and over 75 other pets are checked into the Red Cross center at Indian River High School to ride out Hurricane Irene in Dagsboro, Del. on August 27, 2011. (Suchat Pederson/The News Journal/AP